I’m checking my Facebook feed a lot less frequently these days and I know I’m not alone.  It’s election season.

Now before you get all up in my face about freedom of speech and creating a national dialog, give me just a minute to present my case.

So what exactly bothers me? Status updates like, “If he could lead as half as well as he can speak, things would be so much better for him and the country” or “I feel weird today.  It’s like 47% of me wants to lie around and have welfare babies and the other 53% is an asshole.”

Why do they bother me?  Mostly because in just about every case it’s parroting back wonkish party-line vitriol in what I believe is an inappropriate forum.  I’d probably react differently if I agreed with the sentiment or if it was an opening to thoughtful debate or dialog, but it’s rarely either.

But herein lies the issue—what’s an inappropriate forum?  Furthermore, who am I to determine what kind of speech should occur on Facebook?

I assure you, not only do I not want any sort of control over the speech of others, I’d hate to build a feature into software that would provide that control for anyone else.

So what’s the solution?  Facebook should allow ad-hoc tagging of anything that shows up in my News Feed and to filter what I see by default on those tags.  Why aren’t they likely to do this?  Because they’re a public company. 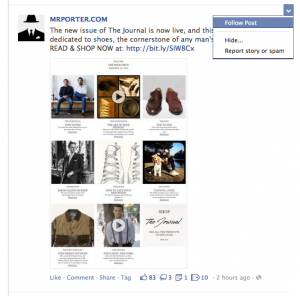 There’s already this awesome feature that has allowed me to weed out all the garbage I was getting from things like Farmville, Words With Friends, Bejeweled, or Mafia Wars. In the top right of each of these abhorrent posts you can choose to block the app in perpetuity.  Bingo, they all went away.  My timeline may have gotten a lot quieter, but also a lot more relevant to what I want to use Facebook for.

Tagging isn’t anything new online, and it really shouldn’t be something Facebook hasn’t already considered. If Facebook allowed tagging, I could, for example, add a “politics” tag to any of my friends’ posts that I thought were political in nature.  Similarly, you could add the tag “barforama” to someone’s post you thought was disgusting.

After items have been tagged, anyone could select the pull down at the top right of each news item and choose to hide all news tagged political or, conversely, show just the political entries in their news feed.

The early users of Twitter saw a need for this arbitrary organization of content and the hashtag was born.  For example, the hashtag #WTF is frequently good for a chuckle. Adding something similar to Facebook is not only a killer way to let users re-shuffle content as they’d like, and discover new (old) friends, but it would likely add a missing dimension to the interface that would result in even longer browsing sessions.

So why wouldn’t Facebook implement this sort of solution? Because it might affect the stock price.  Scary right?  Long term good for customers is bad for the stock price.  Why would they even worry about this when everything they’ve been touting is all about long-term valuations?  Because consumers have a proven track record of removing advertising and unwanted content from the media we consume.  Huge numbers of customers selecting to ban advertising would be bad for business.

Which makes me wonder, why did Facebook go public in the first place?  Why would Mark Zuckerberg, in all his quirky transparency obsessed genius, choose to shackle the innovation at Facebook to the whims of a fickle market? I know I’m not the first to ask this question, and the best answer I’ve heard so far has been that it was the easiest and best way to reward the largest number of investors who’d been with the company for a long time and were starting to get impatient. Oh, and that pesky SEC regulation about the number of shareholders.

Still, I’m beginning to get the impression, especially after having worked at two separate internet tech companies who went public (PXCM, USWB) that going public is rarely good for much other than either the ego or the exit strategy of upper management.  Heck, google went public and still doesn’t know what to do with the proceeds.  Yet every thing they do affects their stock price and they’re beholden to the same whims of short-term investors that recently have defined the strategy at many large corporations. No wonder CEO tenure is flirting with all time lows.

One could argue that anything you do as a company will intrinsically affect the value of that organization, and they’d be right. But the differences are how carefully controlled that value proposition is being made and the emotional state of the potential investor. The second you open your mouth as a public company, your stock will move in anticipation of market reaction. If you can afford to avoid that type of scrutiny and unintelligent oversight, I’d avoid it all costs.

So, until Facebook stock hits $12 a share and Mr. Zuckerberg can start buying his company back from the exuberant masses, we’re stuck in a sort of limbo where Facebook is less concerned with proving its value to an existing user base and more worried about the next killer app that grows the bottom line.

Maybe my dream feature will be ready for the midterm elections in 2014, but I’m not holding my breath.