Getting the Band Back Together

Today James Murphy published a lengthy blog article giving background to the recent announcement that he and the rest of LCD Soundsystem would be headlining Coachella this year. Fan responses have been mixed which is frequently the case once a band says “Goodbye”—especially one that did it so dramatically with a series of New York concerts in 2010 ending with a nearly 4 hour long show at MSG featuring every song they’d ever released.

So why am I so excited about referring to them in the present tense again after 5 years when I’ve been so reluctant to return to another band I used to love (Phish) upon their return following a similar goodbye concert? Naiveté?

The first and only time I saw LCD Soundsystem in concert was on a double billing with MIA at the 9:30 Club in Washington, DC. My wife was quite pregnant with our first daughter (who’s now 10) and we’ve always joked with her that it was her first concert. She doesn’t think we’re as amusing as we find ourselves.

To be honest, while I liked them at the time, I was more excited for MIA. That all changed when they started playing. It didn’t take long before they were one of my favorite bands.

The first time I saw Phish was during the summer between my junior and senior years of college in 1993. I had a good friend who was a huge fan and excited to share them with me. The show was just outside of DC at a venue called Wolf Trap—an outdoor performing arts venue that’s part of the National Park Service. It’s a beautiful place to see a show in the summer and this concert was no exception. It was the first of a run of twenty+ Phish shows I’d see over the next ten years and it’s still one of the best I’ve seen.

Want to see a list of the concerts I’ve seen?

I saw Phish play in New York City, Hampton Virginia, Prague, Penn State, Washington DC, Oswego NY, at festivals (they don’t headline, it’s all Phish, all day) clubs, arenas, and college auditoriums. There was something about their instrumentation, the rhythms, and the sheer joy they conveyed when they played that was contagious. Their music seemed complex and rewarding—musically challenging by one measure, simplistic and silly by another. I was never attracted to the scene, it was always the music, the groove. I listened to a lot of other bands at the time, but these guys were on heavy rotation.

In 2004, ten or so years after my first show, Phish held a festival in Coventry, VT. We bought our tickets and made the pilgrimage. We had been to a few festivals in the past and we were going with our friends who were pros at the whole thing at this point, so we felt prepared for anything that we were going to have to deal with.

Except, perhaps, two solid weeks of rain that turned the entire festival grounds into a mud bog more appropriate for rice farming than parking cars or, say, walking. 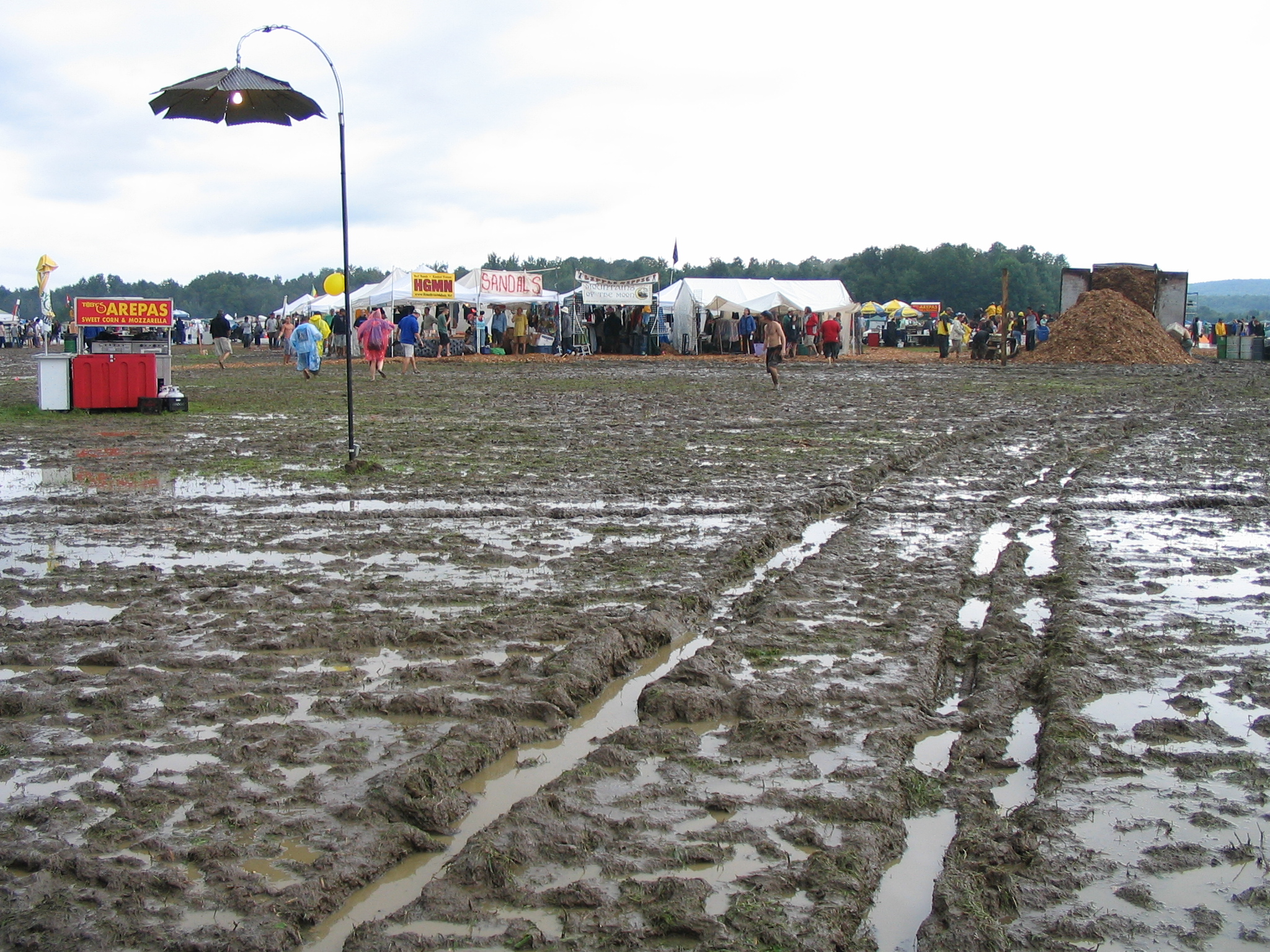 Now, you may be thinking that every festival has a run-in with mud. Yes, they do. The singular difference here was that the band had leased farmland for this festival. Farmland that was soft, and rich, and full of… well, you know what they use to help plants grow, right?

We were some of the lucky ones who got into the festival before they started turning people away—if you consider having your car towed to the middle of a mud pit by a farmer in an oversized tractor because that’s the only way they can park your car “lucky.”

We found a relatively dry spot to set up our camp and made the best of it.  We were better prepared than most having a camping shower, the right footwear (we heard rumors of trench rot over the weekend), and enough food and water that we didn’t need to go anywhere or buy anything.

And then we went and listened to the most mediocre sets of music any of us had ever heard the band play.

We all knew at this point that the show was a goodbye. Trey had announced an official end to the band following years of intermittent haitus so we all knew it was over.  It was sad, but part of me felt like it was time. The band didn’t have that joy anymore, and neither did I.

After we left, I would occasionally pull out a show to listen to or throw on a scratched copy of Nectar or Farmhouse, but I had made a mental shift away from jam music for the most part, and they were the last jam band I was interested in.

One of the new bands I started hearing about was LCD Soundsystem.

I got that first double CD because Pitchfork made such a big deal about it and frankly, it sounded awesome. During one of my Tower Records music binge nights (Tuesday new releases!), I picked up my copy and it became a quick favorite.

We attended the aforementioned show, and they became even bigger. Their presence was huge. They filled the 9:30 club like no band I had ever seen. Their music was enormous, it was infectious, it was raw, it was danceable, it didn’t take itself too seriously, and it was exactly what I needed right at that moment.

Over the years as our daughter grew and we had a second, my career progressed, and we worked on making our house a home, new music from LCD Soundsystem was always a highlight—something we could both get excited about. Concerts were difficult, and the band would sell out before we could get tickets. We never saw them again live, in-person.

And before it was time, or rather before I was ready, they were hanging up their coats and calling it a day.

In 2010, the band announced that they had written all they were going to write, that they didn’t want to get any bigger, and so they’d go out with a bang: a big blow out at Madison Square Garden.  Of course I wanted to go. First tour, last tour… perfect bookends. Besides, they had essentially sountracked the prior 5 years of my life. How could I not?

Due to the overwhelming desire for tickets and the utter incompetence of the responsible ticketing agency, few got their golden ticket. So more shows were announced leading up to the big one. I tried to get seats for any of them and was unsuccessful.

The final show was broadcast over the internet, and we watched much of it’s terribly pixellated, awful sounding stream the night it happened. It was bittersweet. I really didn’t want it to end yet.

If you followed the Phish saga after that final show, you probably know that one of its members ended up with some drug problems that put him in rehab for a stint. Each of the members began solo careers or new bands. None of it really spoke to me. Partly because I was over Phish (kinda mad at them, but that’s silly), and partly because I didn’t really like the music they were producing all that much. I’m sure it’s great stuff, just not my thing.

In 2008 they announced a reunion tour for 2009. They’d be playing Hampton Coliseum, a mythic venue for Phish fans, and one I’d been to a few times. My friend called—did we want to go?

If you followed LCD Soundsystem since they broke up, you’d have listened to Museum of Love, The Juan MacLean, or James Murphy remixing tennis matches for IBM.

I’ve thought about this a lot, and I think it boils down to a few things.

How Naive am I Being Right Now?

This reunion is going to totally suck, isn’t it. Name a band who’s pulled this off. It wasn’t Phish. Not James. Not the Pixies or the Breeders or the Feelies. It’s not going to be Guns and Roses at Coachella. So why do I have faith in LCD Soundsystem?

Because I do have faith in this band—along with a dash of hope, some desire, and a basic gut feeling that they whatever they do, it’s going to be interesting, even if I don’t like it.

At least it seems like they’re doing it for the right reasons.

Anyone want to sponsor my ticket to Coachella so I can find out?  🙂

Music Featured in this Article: